”usually as the ester clostebol acetate, is a synthetic anabolic androgenic steroid” 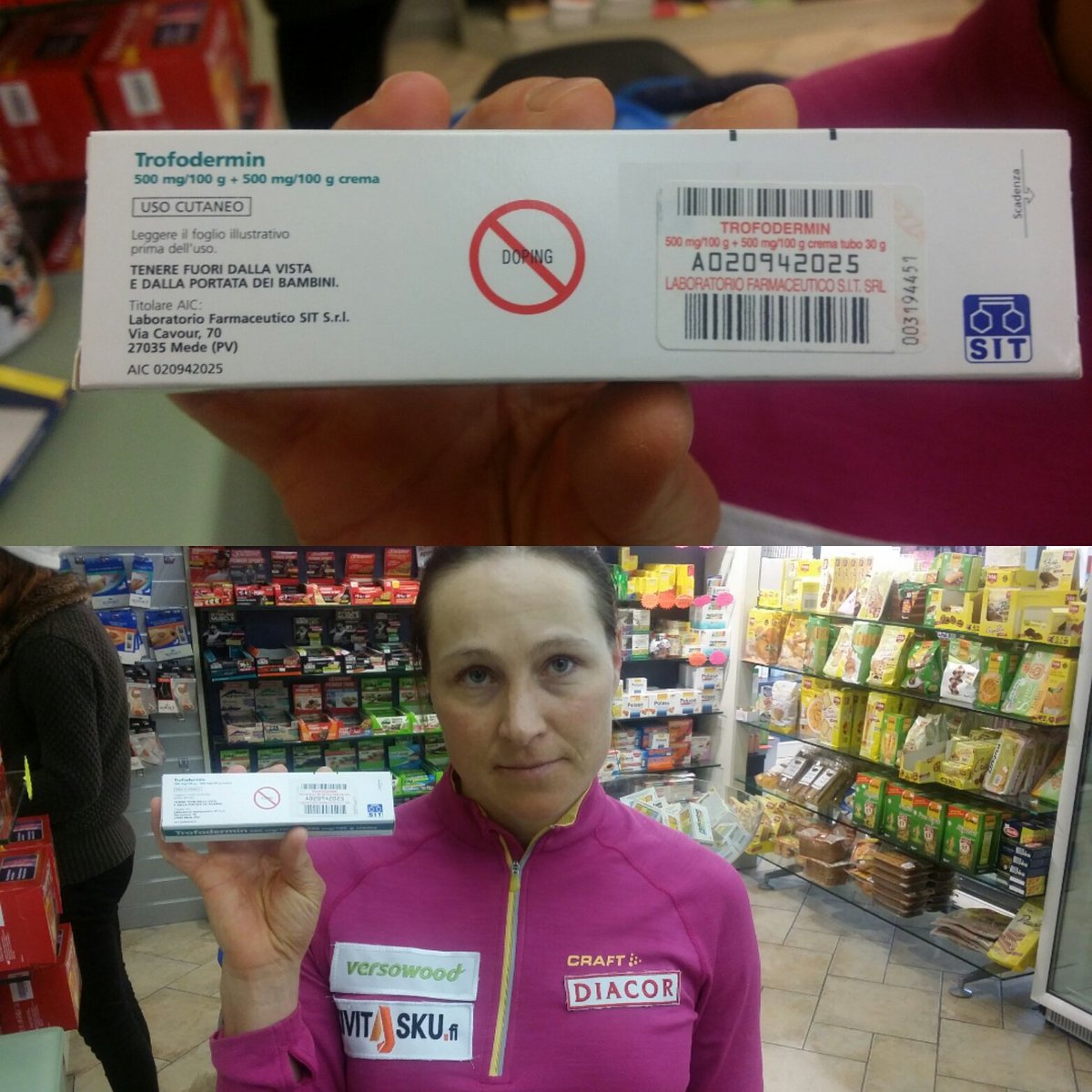 För att få lite mer perspektiv på drogen så är detta citat läsvärt”Until recently, this meant that the detection window was relatively small (despite oft-referenced online “detection times”). However, as of 2016, new technology has increased the detection window to at least 31 days. Oddly, for steroid that has (until very recently) proven to be remarkably difficult to detect,”

Utdrag ur Ironmagazine: So while clostebol is relatively weak, expensive, and rare, the trade-off is worth it to many, who are looking to avoid side-effects…and perhaps beat a drug test. Currently, it’s available on the black market, with both the acetate ester as well as a more long-acting form, which features the same closetebol hormone attached to the enanthate ester. The former would be expected to have an active life of a few hours if consumed orally, or a couple of days if injected. The long-acting enanthate version would necessitate once per week injections, and would be virtually inactive if consumed orally.

”The Appellant has disclosed and substantiated her defence that Dexamethason was not intended to enhance performance. She submitted corresponding medical certifications both to the TUEC and to the FIS Doping Panel as proof of use in alleviating an Achilles tendon condition. In the view of the Panel, upon the Appellant’s prima facie showing that her use of the substance was for medical reasons, the burden of proof shifted to the Respondent to prove the contrary, namely that the Appellant used this substance as a doping agent.”

”The Appellant acted negligently in not inquiring whether Dexamethason fell within the category of ’all glucocorticosteroids. […] Her negligence derives not from any ignorance of the prohibited nature of the substance–she obtained an ATUE already on 23 December 2004; her negligence lies rather in her lack of knowledge and application of the proper TUE procedures for the Specified Substance in question. The measure of this negligence does not, in the view of the Panel, justify a one year term of ineligibility.”

10.4 or 10.5.2 will only apply in exceptional circumstances, for example, where an Athlete could prove that, despite all due care, he or she was sabotaged by a competitor.

Conversely, No Fault or Negligence would not apply in the following circumstances:
(a) a positive test resulting from a mislabeled or contaminated vitamin or nutritional supplement (Athletes are responsible for what they ingest (Article 2.1.1) and have been warned against the possibility of supplement contamination);
(b) the administration of a Prohibited Substance by the Athlete’s personal physician or trainer without disclosure to the Athlete (Athletes are responsible for their choice of medical personnel and for advising medical personnel that they cannot be given any Prohibited Substance);and
(c) sabotage of the Athlete’s food or drink by a spouse, coach or other Person within the Athlete’s circle of associates (Athletes are responsible for what they ingest and for the conduct of those Persons to whom they entrust access to their food and drink).

However, depending on the unique facts of a particular case, any of the referenced illustrations could result in a reduced sanction based on No Significant Fault or Negligence.

Trofodermin side effects: Multiple ulcers in and around the mouth

Snubblade på en intressant kommentar på nätet: Som svar på min fråga om Johaug och varför kan detta vara ett tips.: Dr Michael Joyner, an expert in human performance at the Mayo Clinic, says that the method of delivering drugs has changed too. “In old days when people were taking synthetic steroids they took them by mouth,” he says. “But they get out of your intestinal tract and into the liver and make all sorts of metabolites that have these very long footprints which are easy to detect. So then people switched to plant-based testosterone administered in ways that bypass the liver, such as using patches and gels, and they are micro-dosing by using short-acting compounds.”

Those compounds are usually out of the system too quickly for the standard T/E test, which measures the relationship between testosterone and epitestosterone, to be effective. Only when an athlete is regarded as especially suspicious is the more comprehensive carbon isotape ratio test used as a first screen. The CIR test, which extends the detection period for fast-acting testosterone gels and creams from a few hours to several days, costs $400 and takes 2.5 days to complete, so is far more costly and time-consuming than the T/E test. But as Conte puts it: “If they had used CIR tests, which came in 1994, there would have never been a seven-times Tour de France champion called Lance Armstrong.”

”So then people switched to plant-based testosterone administered in ways that bypass the liver, such as using patches and gels, and they are micro-dosing by using short-acting compounds.”

”Kupczak, who said he massaged every athlete at the Oregon Project on a regular basis, including Farah, Galen Rupp and Kara Goucher, said Salazar would frequently bring Androgel, a banned anabolic steroid, on training camps. The World Anti-Doping Association rules forbid support personnel to carry such drugs without good reason.”

Everybody in Europe knows,that You have an program going in Norway.Steroid-program. You have people in Wada and Fis. so inside information is coming all the time.Clostebol is old DDR drug. Shame on you Norway.

Slutligen:
Defintion av begreppet doping ur WADC:
”ARTICLE 1 DEFINITION OF DOPING
Doping is defined as the occurrence of one or more of the
anti-doping rule violations set forth in Article 2.1 through Article 2.10 of the Code.”
Utdrag direkt ur CAS-domen mot Sundby:
”Martin Johnsrud Sundby has violated Article 2.1 of the applicable FIS anti-doping rules.”
Utdrag ur FIS anti doping regler:
”Artikel 2.1 Presence of a Prohibited Substance or its Metabolites or Markers in an Athlete’s Sample”

“I did not notice the ‘poor air quality’ in Rasnov as my biggest concern was the lack of snow. I think this is an excuse and if the air was bad in Romania I hate to think of what they were taking for Junior Worlds in Kazakhstan where the smog and air pollution was extremely prevalent.”

“In Bucharest, the city air was definitely thicker, but the venue (Cheile Gradistei) was quite remote, at least 20 or 30km from any major cities (or industrial sites, that I know of), out in the countryside, surrounded by rural farmland and fields. Water quality seemed to be a much greater concern in Romania.”

“The air quality appeared okay to me, however there was heating with wood in the area. That can irritate some but no significant quality issues like we saw in Kazakhstan and Turkey. Romania was very warm and early warm conditions can bring on pollen, however I didn’t notice that either.”

“While I’m by no means an air-quality expert, I wouldn’t say the air quality was bad in Rasnov, at least at the race site. The race site was up high on a hill in a very agricultural area, on the edge of some mountains… I never had a moment where I thought to myself ‘wow – this air quality is bad’ and as a coaching staff we never had a discussion that indicated that air quality was an issue with the site. We were mainly focused on having snow to ski on… That being said, in my opinion, it also wasn’t great. There was a big smokestack from what I’m assuming was some sort of boiler that burned wood. It was also pretty dusty from the overall construction.”

Like Kern, Hanneman has been diagnosed with asthma. In his case, he believes that it is a result of growing up in Fairbanks, Alaska, and “racing and training in the very cold and dry air.” He said that he was prescribed a small inhaler to treat his symptoms after a major flare-up in Erzurum, but he didn’t experience a similar problem in Romania.

“I seem to remember that my asthma related problems were not very present in Rasnov,” Hanneman explained. “I took my inhaler like I normally do for races, but the air did not seem to bother me as much as the previous locations. It helped that it was also 55 degrees.”

Why Offer Athletes a Nebulizer?

So, then, was giving new medications to some junior athletes necessary?

“When I first heard the news I was extremely fired up,” wrote Torchia, who initially assumed that the juniors were prescribed the same drug which Sundby had used, rather than a non-prohibited one. “My initial anger eventually turned to being demoralized that doping had come down to the junior level. You hear about the scandals on the World Cup but when it comes to the people you race, it felt like a punch in the gut. The most frustrating thing I have heard was the Norwegian doctor offering asthma medication to healthy athletes. This shows a clear indication from the upper levels of the system to cheat their way to victory. If you can’t compete clean, don’t compete at all.”

As it turns out, it was not salbutamol but budesonide which the athletes were using. Budesonide is not prohibited for inhalation, although like other glucocorticosteroids, it cannot be injected or ingested orally in or out of competition.”